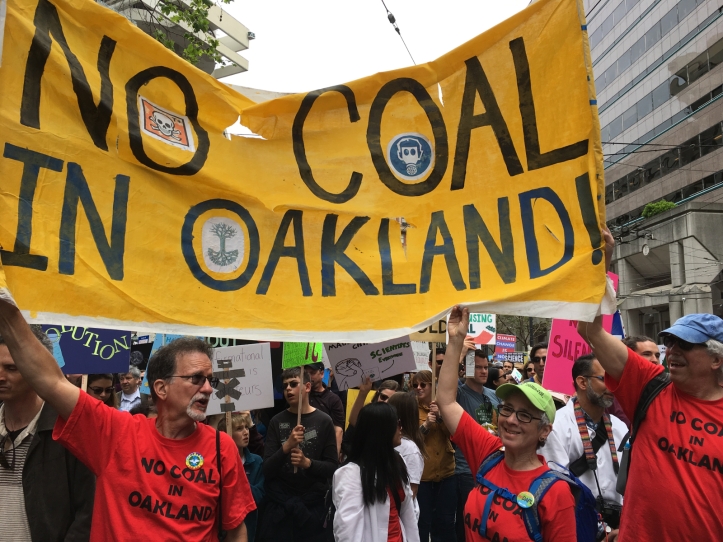 Oakland has long been a center for highly polluting transportation activities. This has resulted in disproportionately high health impacts for the residents of West Oakland. Our goal is to systematically reduce the level of pollution caused by all these polluting activities, and we have made some progress.  But we can’t afford to allow brand new pollution, in the form of coal dust, to further threaten our health.  Coal is the dirtiest fossil fuel on Earth, imperiling the health of workers, endangering communities along the tracks, and contributing greatly to global warming and climate change.

Michael Kaufman, co-facilitator of the No Coal in Oakland campaign, will discuss the history of the campaign, its short-lived victory last year, and the current situation.  He will also address the campaign’s importance in the larger struggle.

​Michael Kaufman has been an activist for his whole adult life in anti-racist, peace, labor and environmental movements.  He fought against the war in Vietnam as a college student while teaching guitar to finance his studies.  He performed as a semi-professional guitarist at the Ash Gove and other venues in Los Angeles in the 1960’s.  He is a founding member, and first elected Treasurer, of Washtech, a union of high tech workers, Local 37083 of the Communication Workers of America, AFL-CIO.

He is a member of Vukani Mawethu, an east bay choir that has focused for thirty one years on South African anti-apartheid and U.S. Civil Rights songs.  Vukani Mawethu is Zulu for “People Arise.”  Last year Michael switched his voter registration to No-Party-Preference in order to vote for Bernie Sanders in the 2016 California Democratic primary election.  After that primary he re-registered as a Green Party member.

Most recently he became part of the leadership of the East Bay Democratic Socialists of America chapter.  Last June he was elected to be a delegate to 2017 DSA National Convention, just held in August in Chicago.  Michael has been a co-facilitator of the No Coal In Oakland campaign for the last two and a half years.

WHEN: Sunday, September 10th, 5:00 pm
LOCATION: Niebyl-Proctor Library, 6501 Telegraph Ave. at 65th in North Oakland
DIRECTIONS: One block north of Alcatraz on the West side of Telegraph, wheelchair accessible. Buses pass by regularly. Ashby BART is approximately 7 blocks away.

SPONSOR: Green Sundays are a series of free programs & discussions sponsored by the Green Party of Alameda County and are held on the 2nd Sunday of each month. The monthly business meeting of the County Council of the Green Party of Alameda County follows at 7:45 pm; council meetings are always open to anyone who is interested. Please visit our website: https://acgreens.wordpress.com/