Green Sunday: The Fight to Save Public Education in Oakland, with Mike Hutchinson 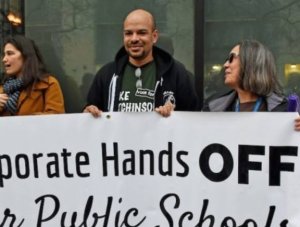 Public education is under attack both nationally and here in Oakland. Most of these attacks have been orchestrated by a small group of billionaires who have used their vast fortunes to leverage policy decisions that have decimated our schools. These policies are collectively referred to as “education reform”. The best known “education reform” is charter schools. Oakland had the highest rate of charter schools in California and is home to many of the leading advocates of education reform and school privatization.

We will talk briefly about the history of public education in Oakland, especially since the state takeover in 2003. The rest of our conversation will be focused on the current situation OUSD faces with the threat of a state takeover again looming, and ways we can resist and fight back. We must guarantee that we have quality public schools in every neighborhood.

Mike Hutchinson was born and raised in Oakland and is a proud graduate of the Oakland Public Schools. After working in our schools for 20 years, in 2012 he became a public education advocate. Since then he’s been working to save and fix public education in Oakland by any means necessary. He is currently working to build the organization he co-founded, OPEN: the Oakland Public Education Network, which is a founding member of the Journey For Justice national alliance, and the west coast anchor organization for the #WeChoose national campaign.

DIRECTIONS: One block north of Alcatraz on the West side of Telegraph, wheelchair accessible. Buses pass by regularly. Ashby BART is approximately 7 blocks away.

SPONSOR: Green Sundays are a series of free programs & discussions sponsored by the Green Party of Alameda County. They are normally held on the 2nd Sunday of each month, but for March it will be on the 4th Sunday. The monthly business meeting of the County Council of the Green Party of Alameda County normally follows at 7 pm; council meetings are always open to anyone who is interested. Please visit our website: https://acgreens.wordpress.com/