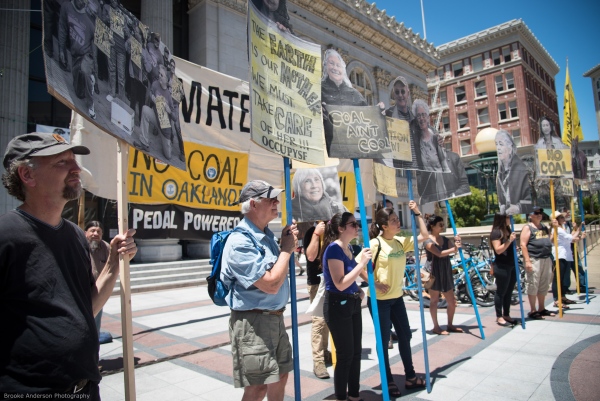 Bay area climate justice activists have a victory to celebrate: the Oakland City Council’s unanimous June 27, 2016 vote to ban large coal shipments from a new Oakland marine export terminal. The grassroots organizing that made this possible will be highlighted with a report back by Margaret Rossoff of No Coal in Oakland. Ella Teevan of Food and Water Watch will present on and contextualize the emerging campaign to ban fracking in Alameda County. Then both speakers will reflect on the state of the movement to stop global warming to prevent catastrophic sea level rise and offer their perspectives about where do we go from here. We will conclude with a vigorous, thoughtful conversation about next steps for the Climate Justice Movement in Alameda County and the Bay.

Margaret Rossoff is active in the Sunflower Alliance and a participant in No Coal in Oakland. She facilitated Occupy Oakland meetings and was a founder of the Occupy Oakland Environmental Justice Committee.

Ella Teevan is Northern California Regional Organizer for Food and Water Watch. She is leading the campaign to ban fracking in Alameda County. As a student activist at U.C. Berkeley 2011-2014, she participated in Occupy Cal.

WHEN: Sunday, July 10th, 5:00 pm
LOCATION: Niebyl-Proctor Library, 6501 Telegraph Ave. at 65th in North Oakland
DIRECTIONS: One block north of Alcatraz on the West side of Telegraph, wheelchair accessible. Buses pass by regularly. Ashby BART is approximately 7 blocks away.

SPONSOR: Green Sundays are a series of free programs & discussions sponsored by the Green Party of Alameda County. They are held on the 2nd Sunday of each month. The monthly business meeting of the County Council of the Green Party of Alameda County normally follows at 7 pm, but we will not have a Council meeting on April 10th. Council meetings are always open to anyone who is interested. Please visit our website https://acgreens.wordpress.com/